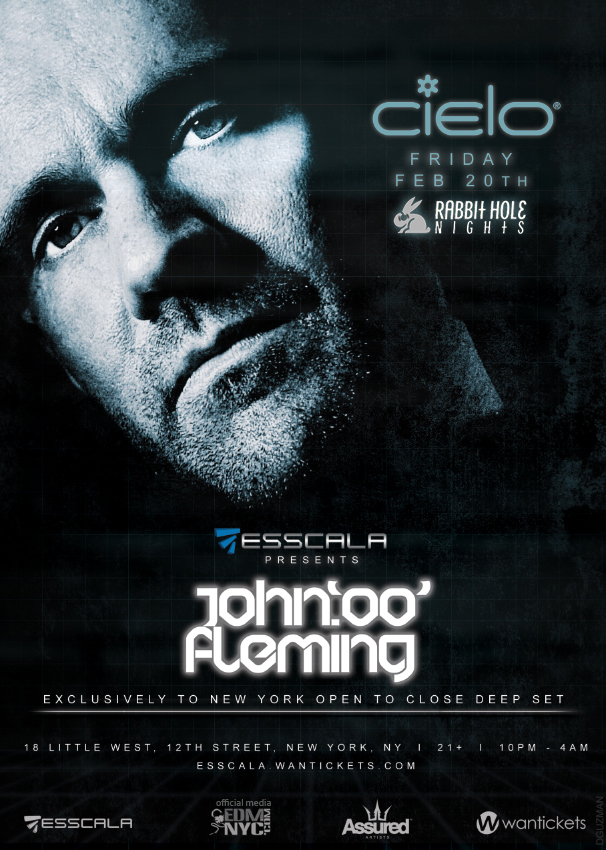 A few years ago, during the rapid development of commercial trance music, John 00 Fleming started to lose his draw in NYC.  Party-goers were more concerned about theatricality and poshness than they were about the music, and a new wave of young dancers with arguably abysmal musical taste slowly drove the true artists away from our beautiful city.  It’s what popularity and commercialization does to music — this isn’t news to anyone.

The bubble had to eventually burst, though, and by now it seems that it has.  The draw of commercial electronic music is beginning to wear thin, and the younger clubbers are refining their taste faster than most of us expected.  Three years ago Cielo would have been empty for a John 00 Fleming show, but that wasn’t the case on February 20th.  Before midnight the club was already filled, and as I walked through the doors and saw the countless dancers lost in the darkness of the room it gave me hope for the future of the New York City trance scene.

John 00′ was booked to play an open-to-close deep set, something that is exclusive to NYC so far.  Sure, I love psy-trance; I think a lot of people in this city do.  But it’s hard to ignore the fact that the NYC dance music culture is rooted in deep and groovy music, and that’s what most of us want to see on a nightly basis.  John’s deeper style, from his breaks to his prog house to his techno, is my personal favorite side of him to hear.  A 6 hour journey of only this type of music was everything I could have ever wanted.  Through his social media outlets John has expressed that he feels a strong dedication to the NYC dance scene, and it is telling of his talents as a DJ that he was able to pinpoint the exact style that the crowds here truly love.  Further credit goes to Esscala for noticing the same thing and acting on it — together they delivered one of the most fun club nights I’ve been a part of in a long time.

John 00 Fleming started the night off groovy and slow, but he drew the crowd in almost instantaneously.  I’m sure every club goer knows about “that” time of the night, when the room transitions from head-bobbing, casual drinking and light chatter to full-on heads-down dancing.  It seemed that the transition happened far earlier than usual.  As I stated earlier, before midnight it looked as though the entire room was already sucked in.  John just knows how to control a room — he knows what we want to hear and when we want to hear it, and he makes it happen.  He blissfully smashed through amazing track after amazing track, incorporating the likes of Alex Di Stefano, Airwave, Simon Templar and many of the other J00F usuals.  Airwave’s “Tigris & Euphrates” set the room off as usual, and through the 10+ minute ballad I saw the crowd enter a state of trance unlike any you’ve ever seen before.  The highlight of the night came shortly before that, however, when John pulled out all the stops and unleashed the original mix of Bedrock’s “Heaven Scent.”  The room had a collective orgasm, and we all spent the next eight or so minutes living in 1999 together.  Truly a feeling you could only understand by being there.

Cielo, as usual, was clean and cool.  No sweaty men bumping into me, no rude bartenders, no overcrowding, or trash all over the floor, or ten minute bathroom lines.  Everything was just smooth and enjoyable, which seems to be the club’s standard.  I’d happily return to this club before many other places in NYC, and it’s good to see them keep a consistent standard of quality throughout the years.  There were familiar faces abound, and even ignoring the quality of the music it still would have been a fantastic party.

So, as usual, New York had the privilege of hosting John 00 Fleming and he delivered in a way we didn’t even expect.  It takes a truly phenomenal DJ to exceed even your greatest expectations every single time you see him, but John seems to do it with ease every time.  Now begins the long wait until his next booking in NYC.  Esscala, if you’re reading this, it can’t come soon enough!

Qhemist – Organic [Let It Out Records]