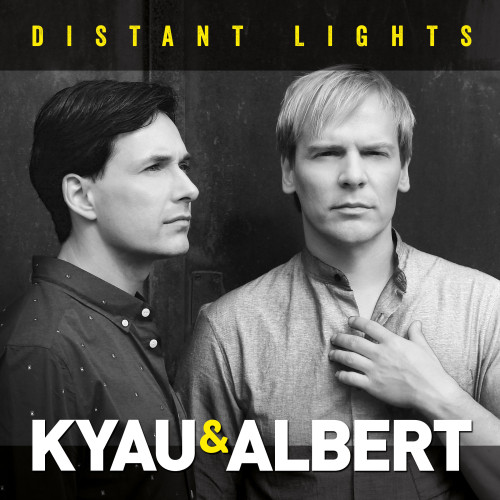 In an industry full of artists changing sounds, Kyau and Albert has stayed true to an uplifting, melodic, euphoric, style of trance for around 20 years with some massive successes.

Coming hot of the heels of their 2014 “Nights Awake” remixes, the legendary German producers are at it again, with “Distant Lights.”

Don’t get me wrong, there is certainly plenty of organic growth to their sound, but those emotional hooks, unique vocals of Steven and even the use of some new instrumentation “A Million Different Stars” the two have proven once again that while trance is a musical genre, it is so much more than that.

“It’s Always Been You” is a soft love song, full of warmth and longing. I love Adaja’s voice, which I first heard on Filo and Peri’s “Fading,” and was also used in K&A’s huge track “Could You Fall.” She has a very impressive range, and ya know that Steven especially has an ear for vocal talent. The track builds nicely, while maintaining an ephemeral sweetness throughout.

“Are You One of Us” was released last year, and trademark voice of Mr. Albert is unmistakeable. Very uplifting with a driving bassline. It’s a cool track, a very “Trance Family” sort of we are one vibe.

“Follow the Waves” is sort of a play on words, as there is reverb/wavey bassline that kicks in. It kinda gives the track a different sort of vibe, like a “dubtrance” eeeek sorta sound. I can dig it on this track, as that wobbly electro bass clearly works here and provides for some variety.

Next up is one of the great collaborations not only within Euphonic but in all of trance. K&A plus Stoneface and Terminal “One.” I wonder if they flipped a coin and Stoneface and Terminal got “We Own the Night” for their be different album (both amazing tunes). “One” is another track about togetherness…. more of a “couple” song with catchy hook lyrics and very danceable uplifting melody.

K&A (as well as an assortment of top international trance DJ’s including Armin, Markus, Gareth and others) have been giving this next track “Calming Rain” a lot of pre-release attention. The track features Maria Nayler on vocals. Now, here’s where you say, who the heck is Maria Nayler. She’s actually been around a long time if you look her up. Check out Robert Miles “One and One” if ya don’t believe me. 🙂

To me, this song speaks to a couple going through a breakup, realizing it was no one’s fault and just letting the rain soothe the memories and pain, and recognizing it’ll take some time. It’s a solid track, and does a great job of highlighting Maria’s voice. I hope to hear her on more tracks, as it is very fitting for trance.

I’m gonna skip to “Down” because it’s one of my favorites. “Down” was another pre-release (or at least I sure heard it a lot over the past for months). To me (and I look forward to asking for their take), this track is about a loved one watching their close / significant other battling addiction. You can say it differently, kick, punch, scream, but in the end, sadly watch it unfold. The story is told under a “simple” melody, in that it allows for the lyrics to truly stand out. The video is also very moving!

– “Let the Thunder In” – OK, first off, I’m a big Neev Kennedy fan, so maybe that pulls me in, but I love the way this track progresses, pulling you in before the first vocals hit. “Love has got me on my knees needing you is a pain that I won’t ease, cause I let the thunder in.” Wow. So cool. Then this track just BLOWS up. Totally big room track you could see someone like Markus playing to a packed Pacha NYC or around the globe. Can’t stop chair raving. Unique, yet so relatable!

“The Same” is probably the most danceable drops on the album. You certainly wouldn’t get that vibe from the start, that sorta sounds like most other K&A love stories you’ve heard a bunch. Not trying to put the boys down, hell most trance themes are the exact same thing. But I do love the drop, I will be bopping all over the place when this one hits. It’s not like 140 banger, but definitely a driving rhythm and has that emotional feel.

As I mentioned previously “A Million Different Stars” is impressive, first and foremost due to the instrumentation. The intro sounds like a harp (I think…) which ya really don’t hear in trance. But it builds with clean sounding instruments, and then adds a sequencer to progress the sound. That “clean” sound is really important here, it has an old school trance vibe to it proving the boys can go back in time whenever they want 🙂 It’s a beautiful track whether or not you’re a huge fan of theirs.

All in all this is a solid trance album from our dear friends across the pond.  A top notch intro to 2015.  Hope to see you guys at Slake on March 20th, or at their other tour dates around the globe.